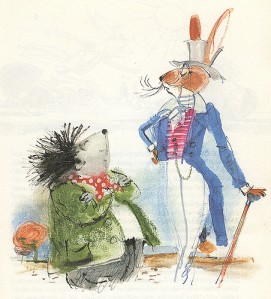 I’m taking a slight departure from picture book reviews today to talk about fairy tales. As a German teacher, and former college professor, I’ve spent a lot of time with fairy tales — teaching the history of the Grimm brothers and their collection of the folk tales handed down in oral tradition as well as the literary fairy tales of the Romantic movement with their intricate tales of madness. Then of course, there are the Disney adaptations with all the blood and violence stripped out, and the marvelous modern re-tellings which turn expected norms on their ears and put familiar characters in diverse new settings.

I read aloud to my kids every night and we’ve done Harry Potter, Narnia, Percy Jackson and many other series, but I thought I’d take a break and pull my “Complete Grimm’s Fairy Tales” off the shelf. The boys appreciate hearing a story from start to finish in one night (another perk of picture books!) and I’m ashamed to admit I never read the boys many fairy tales when they were little. We’re avoiding the old standby tales like Snow White and Cinderella (even though the original Grimm versions are much more exciting and bloody) in favor for a few of the obscure ones I discovered in graduate school and often use in my teaching.

So come with me and explore a few stories which deserve way more attention than they’ve been given by “mainstream media:”

Next month we’ll explore a few of those fairy tales which don’t really need reviving– after all, the complete collection contains 211 tales, and it’s not arrogance to say they are not all “Cinderella.” (Spoiler alert: there’s racism! And sexism! And a dead dog!)