My son is turning 9 today, March 12th! He knows his mom is a writer and I’ve dragged him through the children’s section of enough libraries and bookstores for him to develop a bit of an appreciation for picture books. He was excited when I told him I was featuring HIS choices in my picture book reviews today. So, we are taking a departure from my normal rule of keeping the book reviews current and I present for you five of my son’s very favorites! (like me, he has WAY more than five favorites, but some of them I’ve already reviewed, so we settled on these). Instead of MY favorite part, I will include my SON’s favorite part of the book.

Title: Kitten’s First Full Moon
Author/illustrator: Kevin Henkes
Publisher/Date: Knopf Books for Young Readers, September 15, 2015
The “gist”:  Little kitten thinks the moon is a bowl of milk and keeps trying to drink it.
My son’s favorite part: “I love that it’s all in black and white. I don’t always like that, but it suits this story. It makes me feel peaceful.”
My response as a reader: Kevin Henkes has done so many awesome books such as “Lily’s Purple Plastic Purse,” which was one of the first ones I reviewed in this blog. This book is a huge departure from that one, though both are lovely. The little kitten just charmed me, and like my son, I adore the use of black and white to create the world in this story.
My “take-away” as a writer:   This is such a simple story, but so gentle and sweet that it reminds me a story doesn’t have to knock you over with humor or drama or lessons to make you fall in love with it. There’s excellent use of repetition and a very satisfying ending to make you go “awwww.” What more do you need? (To be able to write & draw like Kevin Henkes…that’s what I need).

Title: Don’t Let the Pigeon Drive the Bus
Author/illustrator: Mo Willems
Publisher/Date: Hyperion Books, April 1, 2003
The “gist”:  It’s your job, reader. You’ve got to keep watch on the bus driver’s bus and do NOT let the pigeon drive it. Are you up for the challenge? Just say…no!
My son’s favorite part: “I love that it looks like a little kid did it.”
My response as a reader: This is the first book in Willems’ extremely popular Pigeon series.  They’re all extremely fun books and we own several. It’s a simple concept– it reminds me of the old Sesame Street skits where a group of kids would watch a clown or other actor trying to do something like put on pants and yell “No!” whenever he did something silly. The comparison isn’t completely out of line considering that Willems has written for Sesame Street. He obviously knows what makes kids laugh.
My “take-away” as a writer: Willems has humor down, as well as the idea of the little twist at the end which happens in most of his books. I’m kind of in awe of that, because his simple style is one of those things he makes look effortless.

Title: Little Beaver and the Echo
Author: Amy MacDonald
Illustrator: Sarah Fox-Davies
Publisher/Date: Puffin Books, September 28, 1998
The “gist”:   Little Beaver lived all alone and cried because he was lonely– but when he called out to the lake, suddenly he found “someone” across the lake was sad too, and struck off to find them. (See title).
My son’s favorite part: “I love that all the characters are so cute, and I love how the old beaver helps the little one.”
My response as a reader: I agree with my son– these animals are super adorable. It’s a story that makes you cry a little but also feel completely warm and fuzzy. It also reminds me of my family’s cabin on an isolated lake, where I spent a lot of time as a child and enjoy bringing my family. The illustrations, like those in “Kitten’s First Full Moon,” really create a great mood.
My “take-away” as a writer: The story is a classic “traveling friends” trope similar to the Wizard of Oz, and just like that, an old sage ends up telling them they really had all they needed with them all along. Happy endings like that can seem preachy or sappy though, and Amy MacDonald strikes just the right note! 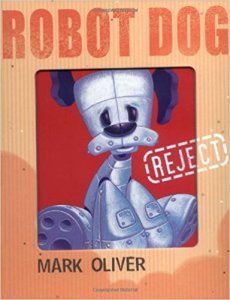 Title: Robot Dog
Author/illustrator: Mark Oliver
Publisher/Date: Good Books, May 1, 2013
The “gist”: Scrap is a robot dog who is damaged on the assembly line and hangs out with the other rejects, desperate for an owner until they get a bright idea.
My son’s favorite part: “I love how cute Scrap is and how the story is sad.”
My response as a reader: Our family loves the movie “Robots,” which has a similar feel to the art in this book. It’s amazing how much emotion can be put into the robot dogs. It’s a great “grass is greener” story, too, since both the dogs with owners and those without have advantages.
My “take-away” as a writer: Hey! Instead of a book that breaks the rules, this one actually follows them! Scrap has a problem, there are “stakes,” and he solves it himself! It’s also a good example of taking two things kids like (dogs and robots) and combining them in a unique way. 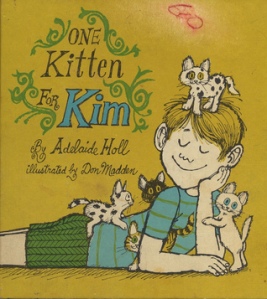 Title: One Kitten for Kim
Author: Adelaide Hall
Illustrator: Don Madden
Publisher/Date: Addison-Wesley Publishing, June 1, 1969
The “gist”: Kim’s cat has kittens, and he may only keep ONE: so he takes the rest in a wagon to give away around the neighborhood, except his neighbors all have other pets to give HIM in return!
My son’s favorite part: “Kittens, Mom! Kittens!”
My response as a reader: This is a book from MY childhood, so it warms my heart that my son has taking a liking to it as well! You can sense a trend here in all the books that cute animals are huge for him and this book is full of them. Bonus: the main character is a boy named Kim– I’ve actually known a couple of those, so the eccentricity is nice.
My “take-away” as a writer: This book has a predictability that I remember really enjoying– it doesn’t take long to figure out what’s going to happen, but you still don’t really know HOW it will happen or which animals will be introduced. It’s also fun to see which kittens go to which owners. Of note to modern writers, however, is the word count– I haven’t counted, but it’s significantly longer than anything that would be published today. I bet this story concept could still be published, but the text would probably be seriously slashed and that’s kind of too bad.