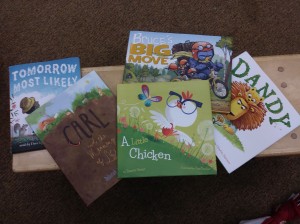 Father’s Day around our house often means an outing to the bookstore–  I rarely buy  my husband books because only he knows exactly which ones he’s looking for, and everyone in our family enjoys a good trip to browse new books. So, time for another crop of reviews! Some of today’s choices include father figures, some are just fun. Let’s explore!

Title: Tomorrow Most Likely
Author: Dave Eggers
Illustrator: Lane Smith
Publisher/Date: Chronicle Books (April 2, 2019)
The “gist”:  Picture a Mom or Dad with their child making a “bucket list” of all the things they just might encounter the next day– animals, city sights, airplanes and all sorts of adventures. Tomorrow, most likely, some of them will happen…
My favorite part: The insect, looking for his friend Stu.
My response as a reader: I love it when I stumble upon a rhyming book, but don’t actually notice it’s written in rhyme for several pages. The rhyme doesn’t hit you over the head in this book, it just provides a comforting structure which supports the reader through the repetition in the subject matter.
My “take-away” as a writer: Every time I review a set of picture books, there’s at least one “quiet” or”concept” book in the bunch. These books don’t follow the “rules” of problem solving, they’re often not funny (at least not intensely so), and they often rhyme (believe it or not, that’s another “no no” in the picture book advice world). So how does a book like that get published? Someone falls in love with it– several someones: an agent, an editor, etc.  Getting a book accepted for publication is not easy (believe me, I know). But if you have an idea you’re passionate about, like Dave Eggers and this book, don’t give up. Someone out there will see the magic in it and create a little gem like this one.

Title: Carl and the Meaning of Life
Author and Illustrator: Deborah Freedman
Publisher/Date: Viking BYR (April 2, 2019)
The “gist”:  Carl is an earthworm and does certain typical earthworm things…but he doesn’t understand WHY he does those things and sets off to find out.
My favorite part: I love that they use the technical term “castings” for the earthworm poo. It’s a useful technical term and flows nicely in the story.
My response as a reader: Would one earthworm really make the huge difference seen in the plot here? Nah, probably not, but it does make a wonderful story and the true work earthworms do is definitely something worth knowing about. My 10 year old son read this one out loud to me and really liked it. He particularly enjoyed how the author-illustrator used the meanderings of the worm as a way to shape the text on certain pages.
My “take-away” as a writer: This is a beautifully crafted story which follows most of the good picture book “rules”– likeable main character who has a problem, approaches many other characters in solving it, and ultimately solves it himself.  It’s not preachy, but it definitely as a great takeaway about being yourself and finding your purpose.

Title: A Little Chicken
Author: Tammi Sauer
Illustrator: Dan Taylor
Publisher/Date: Sterling Children’s Books (March 12, 2019)
The “gist”:  This chicken is, as the title implies, “A little chicken”– but when her future sibling (i.e. an egg) is in danger, she steps up and finds some courage.
My favorite part: The random gnomes are priceless. Trust me.
My response as a reader: To be honest, for me this book isn’t one that adults are necessarily going to pick up and read over and over (like I can with After the Fall, or Red: A Crayon’s Story). But that is TOTALLY FINE.  It’s a sweet, charming book for little ones and they are the ones who will beg for it! The main character is childlike and genuine– young readers will certainly identify with her internal conflict as she tries to do the right thing.
My “take-away” as a writer: The word count on this story is quite low, with only a few words per page, but she uses exactly as many words as are needed to tell the story and keep the action moving right along. A great lesson in word-smithing!

Title: Bruce’s Big Move
Author and Illustrator: Ryan T. Higgins
Publisher/Date: Disney-Hyperion (September 26, 2017)
The “gist”:  Grumpy Bruce the bear is sick of all the animals and noise in his tiny quarters and moves to a larger place with his goslings…but, predicably, this does not solve his problems.
My favorite part: I love the endpapers where you’ll find not only directions on how to play the game mentioned in the book, but also a recipe for applesauce.
My response as a reader: As always, I’m envious of those with real artistic talent, particularly when it is combined with a quirky sense of story like Ryan’s.  Bruce’s eyebrows in particular make his character super endearing. I also like that the scenery (especially the pond) has a great Maine feel.
My “take-away” as a writer: I’ve been a big fan of Ryan’s work ever since Mother Bruce (even though he’s been publishing way before that). My kids have a signed (and doodled) poster on their walls from when he was at our local Barnes & Noble. He and fellow southern Maine author Julie Falatko (whose “Great Indoors” I reviewed last month) are inspirations to me and I see them both as mentors even though they may not know who I am, because their work both in their books and in the writing community has taught me so much about the craft. 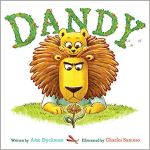 Title: Dandy
Author: Ame Dyckman
Illustrator: Charles Santoso
Publisher/Date: Little, Brown BYR; First Edition edition (April 2, 2019)
The “gist”:  Daddy-lion is trying hard to have a lawn as pristine as those in his neighborhood, but a pesky dandelion (which happens to be protected by his daughter) is getting in the way.
My favorite part: There’s a great moment when the Dad turns to his neighbors, expecting to get grief from them for his behavior, only to get sympathy, because after all, they are daddies, too.
My response as a reader: Now THIS is a great Father’s Day book. As far as I’m concerned, you should give this to parents-to-be right alongside What do Expect When You’re Expecting, because this story represents the struggle of parenthood. Someone once said cleaning your house while you have kids is like brushing your teeth while eating Oreos.  Dandy’s struggle is real– he has to put his own priority of having a beautiful lawn second to his daughter’s passion for the beautiful dandelion she has found.  Having kids helps you see what’s truly important. Besides, dandelions attract bees and are much better for the environment than a silly old lawn!
My “take-away” as a writer:  Ame Dyckman is another superstar in the kidlit world, and I envy her authentic, effortless and quirky zaniness (or is that zany quirkiness?) My husband says only redheads can be zany, but I disagree. At any rate, her books are all so different but manage somehow to be both hilarious AND have tiny  little life lessons in them. Danged if I know how she does that, but I’m trying to take notes.