As a teacher, I head back to school Wednesday for faculty meetings and training. It’s been a great summer with lots of reading, writing and adventures with the kids from our annual “Summer Fun List.” I even spent time cleaning out the basement! While I adore teaching, it’s always hard to fit everything in once things kick off, so here’s another set of PB reviews before it’s truly crazy. In today’s batch I focused on books by authors who do NOT illustrate their own works. As it happens, these books also serve as some great mentor texts and inspiration. Seeing all those talented author-illustrator combos can sometimes be intimidating, but it’s not the only way to succeed. We’ve got this! Enjoy!

Title: how to CODE a sandcastle
Author: Josh Funk
Illustrator: Sara Palacios
Publisher/Date: Viking BYR (May 15, 2018)
The “gist”: Pearl’s dream of building a sandcastle has been thwarted all summer, but now she’s going to do it — thanks to her robot Pascal and some basic coding principles!
My favorite part: Pascal’s “errors”– particularly his taste in sandcastle decorations– were adorable and served to help Pearl refine her commands.
My response as a reader: I would have loved this as a kid! Coding wasn’t a “thing” when I was of picture book age, but I do remember going into Radio Shack and using BASIC to get the computer to scroll my name across the screen ad infinitum. I always assumed today’s code was impossibly more difficult, but this text demystifies it enough for me to realize that at its heart it really is the same “basic” idea!
My “take-away” as a writer:   Josh is such a nice guy (and so hard working!) I just can’t hate him, but he’s become a rock star children’s writer with a day job as an IT guy– an unusual combination!  His first several books have nothing to do with IT, so the whole “write what you know” thing obviously isn’t the only key to success, but it’s great to see authors let their personal talent and experience cross over and I often think about ways I can incorporate some of my background in my work. 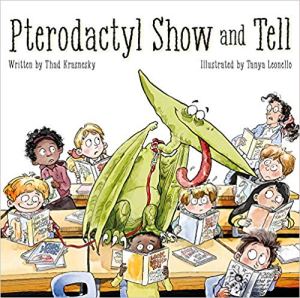 Title: Pterodactyl Show and Tell
Author: Thad Krasnesky
Illustrator: Tanya Leonello
Publisher/Date: Flashlight Press (October 3, 2018)
The “gist”: A boy brings his pet pterodactyl to school and although the dino means well, with each passing class the students are more and more intimidated.
My favorite part:  I loved the detailed illustrations! Take a look at the expressiveness of the eyes on this cover (which is an illustration from inside the book, i.e. a “magic page” as my son’s kindergarten teacher called them). Not only is the stress clear from their panicked expressions, but the titles on each kid’s book adds to the atmosphere.
My response as a reader: I loved the fact that even though I often write in rhyme myself and am on the lookout for good rhyming texts, it took me until halfway through the book to realize this was actually written in rhyme! My excuse is that I wasn’t reading it aloud, and also because with only one line per 2-page spread, one didn’t see the couplets next to each other, but it’s a testament to good, natural writing that the rhymes didn’t jump off the page!
My “take-away” as a writer: This book reminds me of my poem “I got myself a dragon!” which likewise outlines the joys and pitfalls of an unusual pet. My first worry about my own story is that it doesn’t truly have a story arc, and in that respect these stories are similar, BUT this one does have a progression which leads to a little twist at the end, so maybe I need to do some revising!

Title: Creepy Pair of Underwear
Author: Aaron Reynolds
Illustrator: Peter Brown
Publisher/Date: Simon & Schuster BYR (August 15, 2017)
The “gist”: Think of the old classic “the cat came back,” but with creepy underwear.
My favorite part: Once I caught on that this was sort of a “cat came back” scenario, I wondered where it would end. The twist was really satisfying!!
My response as a reader: I am a bit sad my boys are aging out of picture book read-alouds (we still do them, but we’re mostly on to things like Rick Riordan and CS Lewis).  This book screams to be read aloud.
My “take-away” as a writer:  I’m not a huge horror fan, but I love suspense like the “Twilight Zone” series and anything Alfred Hitchcock. Reading this made me want to work on a picture book version of one of those (ok, but not Psycho). Reynolds did a great job of including just enough “creepy”!

Title: Snow Pony and the Seven Miniature Ponies
Author: Christian Trimmer
Illustrator: Jessie Sima
Publisher/Date: Simon & Schuster BYR (August 21, 2018)
The “gist”: It’s the Snow White fairy tale…with ponies. Sort of.
My favorite part: Oh gosh, it’s the miniature ponies! No sneezy, bashful and happy here. There’s a beekeeper pony…and a tax attorney!
My response as a reader: Full disclosure: I was a horse freak as a kid. I took lessons, read all the Marguerite Henry and Walter Farley books, I had a collection of over 100 Breyer collectible horses (I still do, actually: if you are looking to buy some, let me know…my mother would love to get them out of her house).  I would have been all over this book and perhaps played it out with my friends. It’s pretty cute, but it’s got some great voice and humor that elevates it from being a retelling that panders to the horsey set.
My “take-away” as a writer: You can never go wrong with a good fairy-tale retelling, but it’s imperative you do something different if you’re retelling a story we all know.

Title: The Sloth who Slowed us Down
Author: Margaret Wild
Illustrator: Vivienne To
Publisher/Date: Harry N. Abrams (August 14, 2018)
The “gist”: It’s all in the title, really. Amy’s family is the “speediest family in the world,” but when she brings home a sloth, the whole family has to learn how to slow down.
My favorite part: This is a book that actually accomplishes with the reader what it accomplishes for the family in the story:  it’s kind of impossible to read it quickly. You have to just smile and take it in.
My response as a reader: To be honest, this is a predictable story (for an adult reader, anyway), but it’s so sweet and honest that you’d have to be heartless to pan it.  Look at the little girl’s and the sloth’s faces on the cover. They beg you to sit down and share a bowl of salad with them. Or take a long leisurely bubble bath.  Interesting trivia tidbit: This book was originally published in Australia, where the title is “The Sloth who Came to Stay.” Not entirely sure why the title was changed, since it basically gives away the plot, but maybe we Americans move too fast and need the title spelled out for us?
My “take-away” as a writer: Like the Pterodactyl book earlier, this is another “adventures with an unusual pet” book– and in that respect it lacks a strong story arc.  There’s a bit of a problem, sure, but there are no “failed attempts” to solve the problem. But remember, writers: good picture books often break the rules! This one keeps us going because even though the title tells us what will happen, we’re not sure HOW– will the parents get angry? Will the sloth end up making them late for work or school? Will keeping a sloth become too much for them? Suspense is not only built through failure, but also by creating characters who the readers care about. And yeah, this part came up bold by mistake, but I’m keeping it.