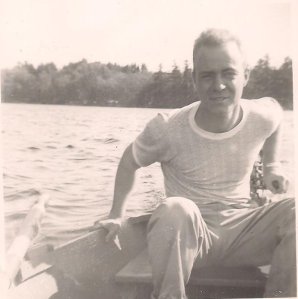 This weekend we held the memorial services for my Dad, Frank Manzer, who died last week after many years of ill health. I know this blog is usually about the craft of writing and language, but writing is also about memories and emotion. So I thought I would share the words I delivered at his service yesterday, because my Dad taught me a lot about the craft of writing, both explicitly, and by giving me a childhood filled with the kinds of experiences which have provided a lifetime of writing material:

When I was a little girl and we visited “Gramp Manzer,” my Dad’s dad, he was always sitting in a chair being gruff and quiet. I heard stories about how active he had been– he was a “good man, once,” people joked, but it was hard to believe of someone so frail. Meanwhile “MY DADDY” was a Paul Bunyan of a man (though much shorter), who could do anything. Years later, at the end of his life, I knew my own dad had become that same frail man to his grandchildren. So there are a few things I’d like you to remember about my Daddy– some things you might not know about him if you just knew him as a grumpy old man sitting in a chair watching Gunsmoke and the Red Sox. (Cause he certainly was that, too!)

1)    My Daddy could carve a whistle from a willow branch. In the spring, when the sap of trees starts to run, you can cut a piece from a willow branch, pull the bark off, cut a few notches in the branch and holes in the bark, slip it back on, and make a flute. Or at least my Dad could. I read about it in a book once, and I’ll be darned if he didn’t go out that spring and make me one.

2)   He didn’t need to make a willow whistle though– he could whistle with his two fingers loud enough to call all of us in from down by the river.  We didn’t need cell phones. And once, when there were 100 girl scouts at an ice skating party, he whistled loud enough to fill Alfond Arena and call everyone in.

3)   I was well into my teenage years before I realized that limericks were usually “supposed”  to be dirty. My Daddy could write a limerick of five lines which summed up an entire personality.  Here’s just one, written for my music mentor, Barbara:

We all love a Barbara named Smith.
Her talent is surely no myth.
At piano she’s peerless,
Her left hand is fearless:
Just perfect to spice parties with!

If I’ve got any talent at writing, especially poetry, I’ve got him to thank.

4) He could bake biscuits that rose a mile high and cook a fantastic pea soup (even if I never did learn to like pea soup). If he was at a hunting camp, he was usually the cook. His best cooking advice for me– and thus for you:  “Always make sure everyone sees you wash your hands.”

5)  My Daddy could teach almost any kid to hit a baseball– even an uncoordinated one like me. Whether it was a nerf ball and wrapping paper tube in the living room or a baseball and bat in our yard, I’m still amazed at how patient he was as he told me for the thousandth time to “Keep your eye on the ball!”

6) My Daddy could play the piano. Well, not really, but he had a little set of chords he could work through– we called it the “Fire Music” because he’d play it with me while he was building a fire and waiting for it to really get going. He was better at the harmonica though and I’ll never hear “Red River Valley” again without thinking of him.

7)  Remember “Mater” from Cars and how he was the “best backwards driver”? I think he might have had some competition from my dad, who could maneuver a John Deere riding mower with a giant trailer holding two snowmobiles and back it into the garage– never spilling a drop of the drink in his hand.

8)  And finally…My Daddy was MacGyvering things before MacGyver was born.  I may have the details wrong, but have heard this story about how he killed a porcupine (which had been chewing on his boat at camp) with an ice pick lashed to a long stick, and  my mother’s favorite pot has a handle he fashioned from an old ax handle. My Daddy could fix anything. And he usually didn’t even need duct tape.