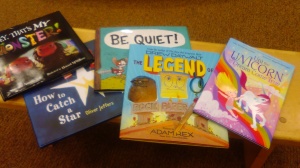 I haven’t had a new blog post in a bit, and if you have been following me, you  know why — not only am I a high school teacher busy with new classes, but I also just wrapped up a poetry exhibit at the local library.  (More on that later…) So, it was great to dive into the children’s literature world again for a while and immerse myself in some great books I’ve been wanting to read.

My focus in this blog is on recent books, often those which have had a bit of Twitter buzz. I try to avoid books by big celebrities (no offense, Chelsea Clinton, Ree Drummond, or Nathan Lane– your books are awesome, but you hardly need my press!).  So, in deciding to pick books today by authors who already have big bestsellers I love, I have to apologize to all those folks with their very first books out — I’ll get to you next time! 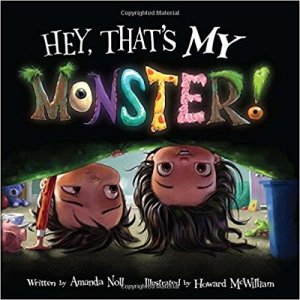 Title: Hey, that’s MY Monster
Author: Amanda Noll
Illustrator: Howard McWilliam
Publisher/Date: Flashlight Press (September 2016)
The “gist”: This is the sequel to I Need my Monster, in which the monster under a boy’s bed goes on vacation and the boy has to endure a string of substitutes. In this book, this monster leaves him for his little sister, who refuses to go to bed (and refuses to be scared of monsters).
My favorite part: I love the clever twist in the ending. (No spoilers!)
My response as a reader: The illustrations here are fabulous and add so much to the story– there’s a tad of a “Monster’s Inc.” feel here, both in the story and in the pictures, and it’s all just so fun and creative! Would make a great read-aloud!
My take-away as a writer: The pacing here is excellent–Noll uses just enough “scary” imagery to make the book a tiny bit creepy, but always in a safe and fun way, just like the first one.  So…yes…this book is a bit formulaic and very similar to the original. But wait, this isn’t a criticism, it just means Noll knows her audience! (In other words, why mess with a proven hit?) 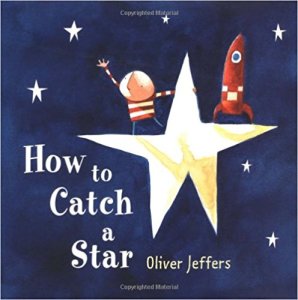 Title: How to catch a Star
Author/Illustrator: Oliver Jeffers
Publisher/Date: Philomel Books (June 2004)
The “gist”: A little boy loves a star so much, he tries everything possible to bring it down where he is.
My favorite part: I loved the scene where the boy was trying to catch the reflection of the star in the water– it reminded me of a similar sweet book, Kevin Henkes’ Kitten’s First Full Moon.
My response as a reader: The book The Day the Crayons Quit (and its sequel), by Drew Daywalt with illustrations by Oliver Jeffers is one of my favorite picture books ever, so I was surprised that this book came out in 2004 and I’d actually never heard of it. I think my boys would have loved it.  Evidently there are others in the series with the same boy as main character. They are quiet but sweet and I can picture them being a favorite just as Kitten’s First Full Moon was for mine.
My “take-away” as a writer:  Jeffers has a really endearing style reminiscent of kids sketches, but you know that a lot of work goes into making them look that “simple”!  As a general rule, author-illustrated books usually have a lower word count than those with separate authors/illustrators, which tells me as a writer not to be afraid to leave room for the pictures to tell the story. 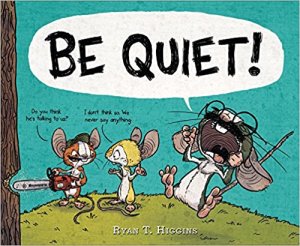 Title: Be Quiet!
Author/Illustrator: Ryan T. Higgins
Publisher/Date: Disney-Hyperion (April 2017)
The “gist”: There have been a lot of famous bickering triplets:  Alvin, Simon & Theodore, Huey, Dewey & Louie, Yakko, Wakko & Dot, etc.  This is the newest triad and they’re trying to create a wordless picture book. Yeah, that’ll work.
My favorite part: I will never think about onomatopoeia the same way again.
My response as a reader: Wait, hasn’t this book been done before? Isn’t this a copy of something? A cartoon epsiode? No? No. It isn’t. But it’s so funny and the characters feel so natural that you just feel like this book has always existed.  Maybe it’s because I’ve watched so much Warner Bros., Disney, etc. I bet kids will be giggling all the way through.
My “take-away” as a writer: Yeah, this book is why I could never do a wordless picture book (aside from the fact I am a rotten artist). I talk too much. It’s the only reason I ever got a detention, if I remember correctly.  And sadly, I doubt most of the time it’s as endearingly humorous as with these three mice. 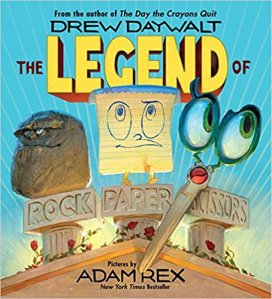 Title: The Legend of Rock, Paper & Scissors
Author: Drew Daywalt
Illustrator: Adam Rex
Publisher/Date: Balzer + Bray (April 2017)
The “gist”: See title. That’s about it…and yet, it’s so much more…
My favorite part: I adored the fact that each of the combattants was truly seeking someone who would challenge them. There’s a lesson there that it isn’t enough to be “the best”– you have to find someone better than you are to truly be satisfied and not bored.
My response as a reader: I LOVE this book! As I said earlier, The Day the Crayons Quit has quickly become one of my favorite picture books, so it shouldn’t be a surprise that he’s hit it out of the park here, too. It’s not terribly complicated but it’s done so well and with such great humor, it appeals to adults as well as kids (if not more so). The illustrations make it, too– so much personality in the characters!  I just might be recommending this as a “Humorous Interpretation” text for one of my Speech & Debate competitors.
My “take-away” as a writer: This is another of those books you feel viscerally ought to have existed already.  It’s a clever concept done so well it’s almost like cheating to write it down. And that’s when you’re good at what you do. When you make it look that easy. My kingdom for that kind of inspiration…coupled with that kind of talent! 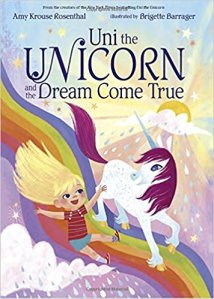 Title: UNI the Unicorn and the Dream Come True
Author: Amy Krouse Rosenthal
Illustrator: Brigette Barrager
Publisher/Date: Random House BYR (August 2017)
The “gist”: This is the sequel to Uni the Unicorn, in which a little girl firmly believes unicorns are real, and a unicorn firmly believes little girls are real, both in defiance of those around them. In the sequel, the little girl is able to visit the unicorns in Unicornland and help restore magic to their land, which had become dreary and rainy.
My favorite part: I loved the page when the girl and unicorn run to each other and the other unicorns say essentially, “Well what do you know? Girls really do exist!”
My response as a reader: I was first introduced to the work of Amy Krouse Rosenthal when my first son was born and my visiting friend bought us a copy of Little Pea (which I also highly recommend!).  She has quite a few other lovely books, but this is unfortunately her last, as she died of ovarian cancer this past spring.  That made it rough for me to get through this book since I was reading it as a bit of a parallel of her last days. During her battle with cancer, she wrote an article which went viral, titled “You may want to marry my husband,” so the idea of a beautiful land of unicorns which had lost its rainbows and sunshine resonated to me so much with her struggle. The ending also features a “Rainbow bridge,” which, if you are familiar with the symbolism as applied to pets, is incredibly poignant.

To be honest, other than the deep emotional aspect related to the author, I didn’t enjoy this one as much as the original, but isn’t that usually the case? Besides, I was one of those kids who was horse crazy but not unicorn crazy, so I’m not quite the right audience. I think my son will enjoy it, though.
My “take-away” as a writer: I know I’ll never reach the audience of an Amy Krouse Rosenthal, but that’s not so important. Reading this book and feeling the resonance of her personality in its pages, I am reminded that maybe, just maybe, one of the books I am writing will touch someone. One of my stories can be the reason a kid smiles.  The pages I am creating can be held and enjoyed by a parent reading to their little one. Thank you for your inspiration, Ms. Rosenthal. I hope you’re out there riding unicorns on rainbows somewhere.