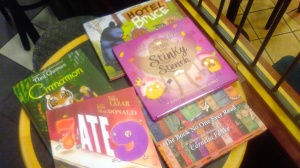 One of my Mother’s Day gifts today was time: a few uninterrupted hours by myself including time to read a slew of picture books at the local bookstore. Although it’s been a while since my last PB Review blog post, I have been reading a lot of picture books, I just haven’t had time to immerse myself in them enough to write quality reviews. So my family’s gift to me becomes my gift to you.

There’s a theme to these books:  they are all written by people I consider as inspirations for my writing, two of whom I’ve actually met, and all of whom I follow on Twitter. I’ll say a little more about those connections in my reviews, so let’s get right to them:

Title: Hotel Bruce
Author/Illustrator: Ryan T. Higgins
(Ryan lives just a few minutes from me on the coast of Maine. His former HS English teacher is now a colleague of mine at the school where I teach– it’s a connection which reminds me that the world of children’s lit is at the same time vast and as close as the next town over. It also reminds me that if I work really hard, there may even be room for me, too! Unfortunately, I am completely lacking in Ryan’s artistic talent, but that’s another story).
Publisher/Date: Disney-Hyperion (October 2016)
The “gist”: This is the sequel to Mother Bruce, about a bear who ends up “adopting” several goslings. In this story, Bruce returns from a southern migration to find his home has been taken over and turned into hotel. Needless to say, he is not happy!
My favorite part: There was so much humor in this book, both in the illustrations and in little bits of side dialog from the animals. One of my favorites was the fox encouraging the turtles to take a nice hot bath…
My response as a reader:  Hotel Bruce is actually even funnier than the original, with fantastic visuals and a fun premise. Maybe part of that was because the author had already built such a strong character base for Bruce in the original, so you were completely sympathetic to his plight in the sequel.
My “take-away” as a writer: Remember that “sympathetic” thing I just mentioned? Bruce is grumpy and unfriendly, but in the end, he does the right thing for the goslings in the first book, and ultimately becomes completely lovable without being saccharine. Like Bruce, Ryan T. Higgins is also a hard working guy — both in writing and in life– though not nearly as grumpy. He built himself a truly enviable writing shed and if that isn’t enough to make him an inspiration as a writer, I’m not sure what is.

Title: The Case of the Stinky Stench (Lady Pancake & Sir French Toast)
Author: Josh Funk
(Josh Funk is one of the first authors I connected with when I started my path toward publication. Though not from Maine, he is a fellow New Englander, so I had the chance to meet him at a book fair last year. He’s an inspiration for a lot of reasons, most notably because he’s shot to stardom with several best sellers in a relatively short time, and also because he writes almost exclusively in rhyme.  As a poet who even wrote a doctoral dissertation about poetry, I am picky about rhyme and meter, and Josh does a phenomenal job of restoring the “reputation” of the rhyming picture book).
Illustrator: Brendan Kearney
Publisher/Date: Sterling Children’s Books (May 2017)
The “gist”: In this sequel to Lady Pancake & Sir French Toast, the pair is asked for their help in solving the mystery of the title: what is stinking up the fridge? Similar to the first book, their quest takes them through lots of food-based antics until they ultimately find the culprit, but no worries, I won’t spoil it for you! (See what I did there?)
My favorite part: I have to nod to Kearney’s ever charming illustrations here, with honorable mention to the search for the “red herring.”
My response as a reader: From the moment I heard this sequel was coming, I was excited at the idea of a mystery– I love the characters Josh has created and the way he revisited them in the sequel. I also loved the unique and unpredictable way he crafted the ending.
My “take-away” as a writer: As I mentioned earlier, Josh gives me hope that they’re still publishing rhymed stories– they just have to be good. One of the ways Josh excels is in the variety of his vocabulary– from the moment he rhymes “Northern Vermont” with “Inspector Croissant,” you know there’s no “cat sat on the mat” to be found here!  Definitely an inspiration to avoid the predictable!

Title: The Book No One Ever Read
Author/Illustrator: Cornelia Funke
(Cornelia Funke first appeared on my radar through her Inkheart books, which I loved. They came out while I was still a professor of German at the College of Charleston, and I used an excerpt of Inkheart in a course I taught on German fantasy literature. It was fantastic to have a modern work to bookend a course which started with the Nibelungenlied, particularly when it is such a wonderful story and concept. As a German author, she bridges my love of German with my love of children’s literature– how could she not be an inspiration?)
Publisher/Date: Breathing Books (May 2017)
The “gist”: Morry has been sitting on a shelf for five years without being read, and he’s frustrated, but his shelfmates have varied opinions on the roles and aspirations of being a book.
My favorite part: I loved the names and personalities of the books– such a great way to include some “stealth education”! Dumas was my favorite!
My response as a reader: The page opposite the title page contains the following message to the reader:  “Please write your name into this book and read it until the pages come loose. Leave your fingerprints in it and kiss its pages and fill it with life and memories, for that’s what it wants!” I love that so much. In perusing the books my children have most loved, I see we have done that to so many of them. I am often frustrated that we didn’t take better care of the books, but Funke’s words remind me that we did take care of them– we just loved them to death.
My “take-away” as a writer: Back when I taught college, I was part of the “publish or perish” rat race, but never very good at it. One reason I left that world was because while I still have a passion for being published, I don’t want to be published just to list it on my curriculum vitæ. I didn’t want to publish articles about literary theory that would rot on library shelves– I wanted my writing to be read and enjoyed. So the title of Funke’s book might as well be “The Author No One Ever Read,” as I think most writers are equally as interested in being loved, read, and re-read.

Title: 7 ate 9: The Untold Story
Author: Tara Lazar
(While I don’t know Tara personally, I follow her blog, I’m on her Facebook group, I follow her on Twitter…and it’s possible she does even know who I am! She’s a rockstar in the world of picture book writers, and the creator of the writing challenge now known as “Storystorm” — formerly known as “Picture Book Idea Month.”  She works incredibly hard for the children’s writing community and her website/blog is an awesome resource including an extensive list of “500+ things kids like” — plenty of inspiration right there on the website, not to mention in the author herself!)
Illustrator: Ross MacDonald
Publisher/Date: Disney-Hyperion (May 2017)
The “gist”: Private “I” is hired to get to the bottom of a difficult case– it’s commonly assumed that 7 ate 9, so other numbers are starting to get worried, and 7 is nowhere to be found…
My favorite part: I loved the way 8 disguised herself as a 0 by taking off her belt.  (Incidentally, it’s also a joke I first heard in a German movie years ago!)
My response as a reader: In a field of some amazing picture books today, this was the one I chose to bring home (sorry authors, I’m poor and could only afford one today!) The wordplay clinched it — I’m going to love sharing it with my math-loving kiddos and seeing how many of the little jokes they get — its incredibly clever. Tara accomplished something similar with the fairy tale genre in “Little Red Gliding Hood,” by the way, another fun read!
My “take-away” as a writer: I’ve watched both Josh Funk and Tara Lazar publish several books in a very short span of time, and at the same time be tireless in promoting their own works and in being supportive of other writers. Not only that, but while both of their bodies of work are surprisingly varied, each one is so carefully crafted! “7 ate 9” in particular is a great example of making absolutely every word work hard for you.

Title:  Cinnamon
Author: Neil Gaiman
(How could the amazing Gaiman NOT be one of my inspirations? Sadly, Neil Gaiman is not one of the inspirational authors I’ve actually met– maybe someday. My first introduction to his work — a bit later in life than it should have been — was checking out an audiobook of Coraline for a long trip with my husband. It was a magical journey (the book, not the road trip) and I still find the imagery disturbing, years later. Somehow Gaiman manages to make creepy things approachable — such as in his captivating Graveyard Book– and in this picture book he makes the idea of letting a self-avowed man-eater into one’s home perfectly acceptable. #writinggoals.)
Illustrator: Divya Srinivasan
Publisher/Date: HarperCollins (May 2017)
The “gist”: In this tale out of time, beautiful princess Cinnamon can’t speak. Her parents are willing to offer lavish rewards to anyone who can get her to speak, but they aren’t so sure how to react when a tiger comes and offers to solve their problems.
My favorite part: Gaiman dispenses with the princess’ crotchety aunt in such a subtle but clever way it almost goes unnoticed.
My response as a reader: I’m not sure if Gaiman based this story on an actual folktale or not, but it certainly has the feel of one. I could easily imagine this as one of the “Just So Stories” from Kipling — in fact, the limerick the parrot recites in the story can be traced to British colonial writing which further accents the feel that you’re reading a story that’s at least a hundred years old. The illustrations are equally bold and evocative, making for a great immersive read. If I could have one complaint, it’s that the ending could be a bit more satisfying. No spoilers of course, but I’d love for Cinnamon to have even more agency than she does.
My “take-away” as a writer: Ah, Gaiman! My husband is still singing the praises of your Norse Mythology and its detailed research (it’s on my to-be-read list), and you come out with a top notch picture book, too? Not fair! I guess if I could draw a parallel, they’re both about creating worlds– something I can definitely work on in my own writing.