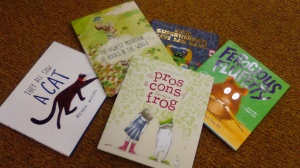 Well the summer is coming to a close and I’ve done pretty well with my goal of posting picture book reviews every two weeks. With school starting up on Tuesday, I don’t think I’ll get to reviews that often, but I will try to keep up with bi-weekly posts nonetheless. There are some amazing books out there, more coming all the time. It truly is a “golden age” for picture books! Enjoy! 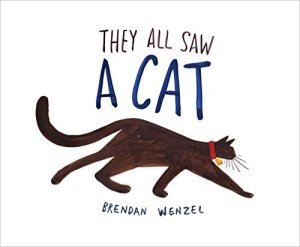 Title: They All Saw A Cat
Author/Illustrator: Brendan Wenzel
Publisher/Date: Chronicle Books (August 2016)
The “gist”: A cat wanders through the house and outside and everyone sees it but through their own perspective.
My favorite part: I loved the illustration near the end which was a Picasso-esque collage of the various views of the cat. It was fun to pick out where the bits and pieces came from.
My response as a reader:  I’ve seen mentions of this book on Twitter for a little while now and have been trying to guess what the title referred to.  It is a simple enough concept, but it was neat to see how the author played with the different perspectives– a bit like the old folk tale about the blind men and the elephant. It also has a real “Eric Carle” vibe as the cat goes from one person or animal to the next– I really think children would quite enjoy it.
My “take-away” as a writer: This book is filled with many key picture book elements: simple language, repetition, engaging illustrations and of course, a cat. I love the old-fashioned sounding phrase “The cat walked through the world with its whiskers, ears and paws…” which is repeated several times.  The one little bit that bothered me was That the cat on the cover appears to be simply black, while the one in the interior illustrations is clearly some form of tabby. Was this intentional to show that everyone sees the cat differently? 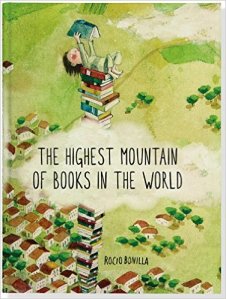 Title: The Highest Mountain of Books in the World
Author/Illustrator: Rocio Bonilla
Publisher/Date: Peter Pauper Press (September 2016)
The “gist”: A boy has always wanted to fly, but when he discovers a love of books, he realizes there is more than one way to fly.
My favorite part: I loved the way my son picked apart the book by asking how the boy got more books to read if he refused to come down. He found the “tall tale” aspect very amusing. My favorite part of the book itself was the many nods to famous works of literature (think “Moby Dick”) in the illustrations.
My response as a reader: When the mother advises her son that there’s more than one way to fly, the title of the book certainly takes away any possible suspense. However, every lover of books will cheer along with him as he discovers his own love of reading.
My “take-away” as a writer: There’s a good balance in the book between the first half, in which the boy tries many ways to build his own wings to fly, and the second half, in which he builds and ever taller pile of books he has read, eventually reaching the sky. It’s a sparse text with a great feeling of magic and wonder. Probably not one I would read over and over again, but definitely a book that leaves you with a smile. 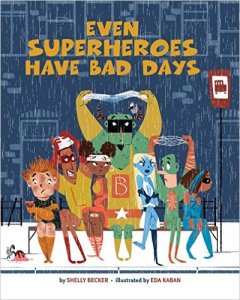 Title: Even Superheroes Have Bad Days
Author: Shelly Becker
Illustrator: Eda Kaban
Publisher/Date: Sterling Children’s Books (September 2016)
The “gist”: The title says it all– but just what do Superheroes do when life gets rough?
My favorite part: I love the end papers which give the superheroes names and personalities.
My response as a reader: I loved this book! As the mom of two boys, both of whom have social-behavioral issues AND love superheroes, it is a great example of “guerrilla education”– gently providing coping strategies for when kids are frustrated but wrapped up in fun rhymes and quirky illustrations. The pacing and style remind me a lot of Jane Yolen’s “How does a dinosaur…” series– and that’s not a bad thing!
My “take-away” as a writer: This is one of those books that make me think, “Dang! I wish I had written that!”  Writing good-quality rhyming work is extremely difficult, and Shelly Becker has done an excellent job here. And of course, superheroes are always popular, particularly now, so I can definitely sense a sequel! 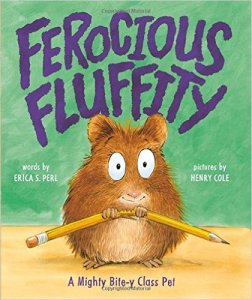 Title: Ferocious Fluffity: A Mighty Bite-y Class Pet
Author: Erica S. Perl
Illustrator: Henry Cole
Publisher/Date: Henry N. Abrams (July 2016)
The “gist”: Class 2-D has a new hamster for a class pet, but when their teacher is late to class, Fluffity goes on a biting rampage.
My favorite part: The illustrations really make this book– they pair beautifully with the perky rhymes.
My response as a reader:  My first response was how awesome that there was a picture book with a hamster as the main character.  My second thought was “Wait, Mr. Drake is late because he overslept? Who’s watching the students??” Granted, they get into trouble with the ferocious hamster, but there’s no mention of a sub in the room and at least they should have had that, right? I know, picky of me, but as a teacher, I think of those things. Kids probably wouldn’t be bothered. Nevertheless, the book was a lot of fun and my son loved the surprise at the end!
My “take-away” as a writer: Wow, two books in a row with super high-quality rhyme! The pacing here is super quick and feels so natural you hardly know it’s in rhyme at first. Along with the fun and vibrant illustrations I bet this will be a real crowd-pleaser. 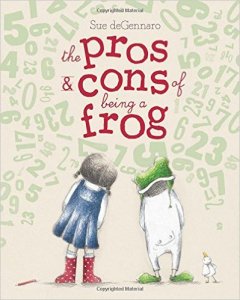 Title: The Pros and Cons of Being a Frog
Author/Illustrator: Sue deGennaro
Publisher/Date: Simon & Schuster/Paula Wiseman Books (August 2016)
The “gist”: The narrator’s friend Camille only talks in numbers, but the two are very close until the main character argues with her about designing a frog costume.
My favorite part: The book begins and ends with the sentence “Camille and I are quite different: Maybe that’s why I like her so much.” In the middle there’s a really lovely story of friendship.
My response as a reader:  When I looked up the publishing information for this book online, the synopsis called the main character a boy, but I read it as a girl (the character has short hair and is in costume for most of the book). I love that it is ambiguous– I think the book could appeal to both genders easily. Likewise, the fact that Camille speaks only in numbers and her friend has to learn “her language” to communicate with her but loves her anyway– what a wonderful concept! Nothing about this shouts Autism or any specific disability in any prescriptive way: it’s just about loving weirdness. And that’s awesome.
My “take-away” as a writer: Who would think that a fairly quiet book about a kid in a frog costume and a girl who speaks only in numbers could be successful? I’m encouraged that this book was published– it’s really wonderful and would appeal to all sorts of kids who might feel they are different.