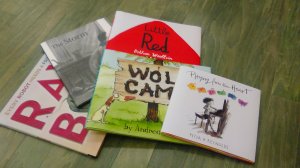 I had a family get-together on Saturday, so my book review plans were postponed until today. My 10 year old helped me with the choices today, all from a visit to Barnes & Noble. There are some good ones today, all very different and all very new– nothing more than 2 months old, people! This industry changes quickly!

Title: Ray Bot
Author: Adam F. Watkins
Publisher/Date: Price Stern Sloan (March 2016)
The “gist”: A cute and clever robot is happy but becomes very lonely with no one to play with. After seeing an ad describing a dog as “your best friend,” he strikes off looking for one. The ensuing journey takes him around the world.
My favorite part: You’d think looking for a dog would be simple, right? I love the conceit that part of the ad was torn, so he doesn’t actually know what a dog LOOKS like and has to instead search for something that goes “bark”. The ending is a sweet resolution.
My response as a reader: This is a pretty “quiet” book and sparsely written, but the character is charming enough to hold the reader’s attention. It reminds me so much of Mark Oliver’s “Robot Dog” which is almost the same story in reverse that I feel like the two books really ought to get together!
My “take-away” as a writer: This is one of those books that starts as one thing (robot looking for dog) and ends as something else (robot experiences adventures all around the world). It is a good reminder for writers to let the book take them where the book needs to take them– and not to be afraid of combining two ideas. If Ray had only looked within his neighborhood, the book would not have been nearly as interesting!

Title: The Storm
Author: Akiko Miyakoshi
Publisher/Date: Kids Can Press (April 2016)
The “gist”: A boy is excited to go to the beach on the weekend but his outing is threatened by an impending storm.
My favorite part: When the storm is over and the boy looks out the window, you see the very first color in the whole book (except for the boy’s shirt on the cover). The sudden blue in the sky hearkens back to the magical scene when Dorothy opens the door into Oz.
My response as a reader: While there is nothing inherently “Japanese” about the book– the themes are truly universal– I get a real Japanese feeling from it for some reason– perhaps it’s the simplicity of man vs. nature and the  magical realism of the dream sequence. In any case, it’s another “quiet” book with a very old feel, but I think kids can appreciate that and it would undoubtedly appeal especially to kids worried about storms.
My “take-away” as a writer: The stakes in this book are clear from the very cover of the book– who can’t relate to making plans only to have them spoiled by the weather. And while you wouldn’t think that a storm would be a problem that the main character could solve…I won’t give away the ending except to say you’re sort of wrong.

Title: Little Red
Author: Bethan Woolvin
Publisher/Date: Peachtree Publishers, Ltd. (April 2016)
The “gist”: It’s mostly the traditional Red Riding Hood story. Mostly. Except Red is not scared one bit.
My favorite part: I won’t give it away, but the illustration when Red opens the door to Grandma’s is priceless. It made my 10 year old smile, too.
My response as a reader: Ok, let’s be honest. This is for the age group 0-3. As much as I love the “Little Red Riding Hood” story (long time readers may recall that I’ve got a PhD in German literature– I’ve studied the original Rotkäppchen and its ilk a LOT), the beginning of this bored me a bit as I waited to see how this version would be different. But overall? It’s got a simplicity that I think really works. The line illustrations are so genius, they remind me of woodcuts, or of Kevin Henkes “Kitten’s First Full Moon” which was one of my son’s favorite books when he was younger. So don’t go by an adult reader’s first impression. If you want your kid to know only ONE version of the Little Red story, this is a good one to know. (Realistically, though, there are many other humorous retellings you should also look at!)
My “take-away” as a writer: There are a TON of Little Red retellings. But it’s a classic story. There’s always room for a fairy tale retelling if you can do it right. And Woolvin’s twist is not earth-shattering, but it makes a big difference in the story.

Title: Wolf Camp
Author: Andrea Zuill
Publisher/Date: Schwartz & Wade (May  2016)
The “gist”: Have you ever wondered just how far removed your pet doggie is from his wolf ancestors? You could always send your pup to “Wolf Camp” where he’ll get to experience true wolf life…
My favorite part: I loved how the author danced around the fact that the wolves killed and ate their prey.  The revulsion of the dogs at eating food with “hair in it” is hilarious.
My response as a reader: In reality, this story doesn’t truly follow the “rules” of a character with a problem so much as it just illustrates a “dream” experience for Homer (the dog). But he’s so endearing you just want to come along with him. Like so many other successful stories, this author has grabbed an idea that probably could have come to anyone and run with it in such a fun way.  The illustrations capture the personalities brilliantly and tell so much more than the words alone.
My “take-away” as a writer: I only just noticed that every one of the books I picked to review today were by author-illustrators. It’s frustrating when that happens, because my hat’s off to their talent, but it’s got to be hugely satisfying for them to be able to really put the two media to work together to tell the story.

Title: Playing from the Heart
Author: Peter T. Reynolds
Publisher/Date: Candlewick (April  2016)
The “gist”: Raj discovers a piano at a young age, but his playful explorations turn to boredom when his father makes him take lessons.
My favorite part: This book had me from the first page. I’ve been playing the piano since I was 5 so I can totally identify with the love-hate relationship of creating wonderful music and the hard work that goes into learning to do it “the right way.”
My response as a reader: I read this aloud to my son and when Raj played for his sick father, I had a hard time keeping my voice going. Granted, I’m an emotional person anyway, but it’s great when a story grips you like that.
My “take-away” as a writer: Like many of the books I reviewed today, the story doesn’t “grab” you with “stakes” on the first page. In fact, this one starts with the simple line: “The piano stood quietly in the living room for years.”  It’s a killer first line, but not because we care about the piano. It’s because we know the power of music and we know that someone is going to do something with that piano that will move us. Of all the books I read for my reviews, I buy very few of them (sorry, authors, I do my best, but I’m poor!). This one, I clutched to my lap and had to bring home. Your mileage may vary, but chances are, there’s a piano player somewhere in your life who needs it.